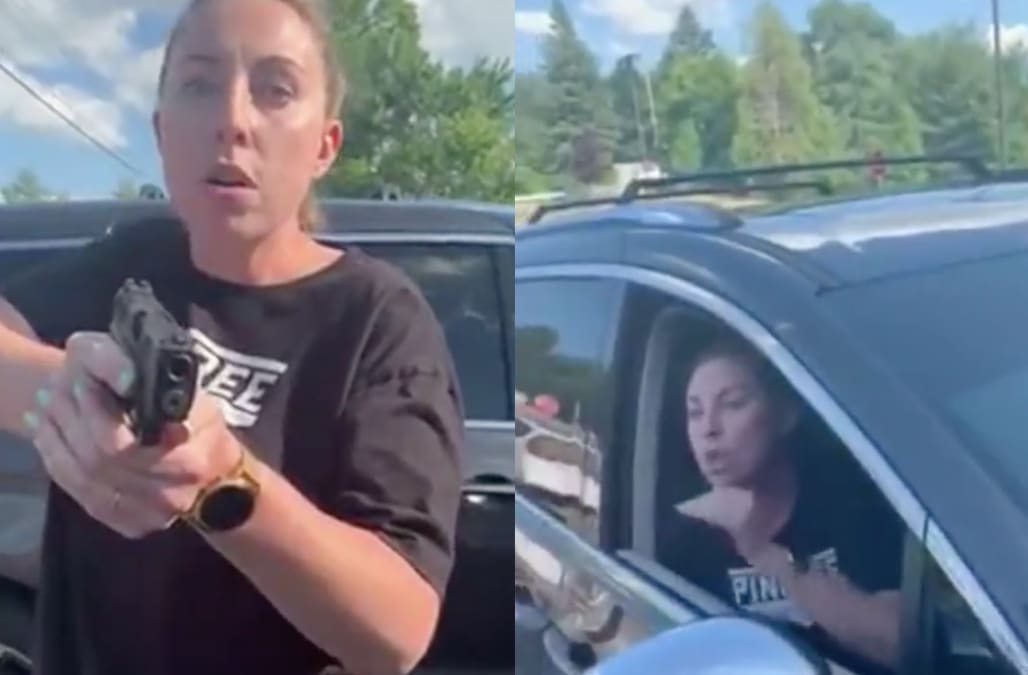 A white couple was arrested after at least one handgun was pulled on a Black woman and her daughters during a videotaped confrontation in a restaurant parking lot in Michigan, authorities said Thursday.

Jillian Wuestenberg, 32, and Eric Wuestenberg, 42, were charged Thursday with felonious assault, Oakland County Prosecutor Jessica Cooper said in a release. It was not immediately clear when they would be arraigned or if they have attorneys who could comment on the allegations.

Cellphone video captured the confrontation Wednesday outside a Chipotle in Orion Township, about 40 miles (64 kilometers) northwest of Detroit.

Jillian Wuestenberg can be seen outside her vehicle shouting, “Get the (expletive) away! Get away!” while pointing a handgun.

She eventually gets back in her vehicle which is driven away by her husband.

Sheriff Michael Bouchard told reporters that the couple is from Independence Township and both have concealed pistol licenses. Deputies seized two handguns from the couple after they were detained Wednesday night following the encounter.

The Detroit News first reported on the three-minute video posted online that shows part of the interaction. Takelia Hill, who is Black, told the newspaper that it happened after the white woman bumped into Hill’s teenage daughter as they were entering the fast food restaurant.

The video footage starts after that, in the parking lot. A woman since identified as Jillian Wuestenberg is heard arguing with Hill and her daughters. Wuestenberg climbs into the vehicle, rolls down the window and says, “White people aren’t racist,” and, “I care about you,” before the vehicle she was in starts to back away.

Her husband, who had led his wife to the vehicle, turns to the camera and asks, “Who … do you think you guys are?” using an expletive.

Then, as someone is standing behind the vehicle, Jillian Wuestenberg jumps out and points a handgun in the direction of a person who’s recording. She screams at people to get away from her and her vehicle. A woman shouts, “She’s got a gun on me!” and urges someone in the parking lot to call the police.

‘An unfortunate set of circumstances’

Wuestenberg then lowers the gun, climbs into the passenger seat and the vehicle drives off.

Cooper, the prosecutor, told The Associated Press that her office viewed the available video and looked at the facts before filing charges.

“It is an unfortunate set of circumstances that tempers run high over, basically, not much of an incident,” she said of the initial alleged spark that caused the confrontation.

Bouchard said people are “picking sides” and that threatening calls were made to the sheriff’s office dispatch center after the videos were posted online.

“We don’t see sides. We see facts,” he said. “There’s a lot of tension in our society, a lot of tension among folks and people with each other. I would just say this, we are asking and expect our police — and rightfully so — to deescalate every situation they possibly can, and we should be doing that. But I would say that needs to happen with us individually in our own lives and situations, that we interact with each other and deescalate those moments.”

‘Massive blunder’: TTC union turned down a deal in the benefits fraud scheme that could have saved money and jobs. Now everyone is paying the price