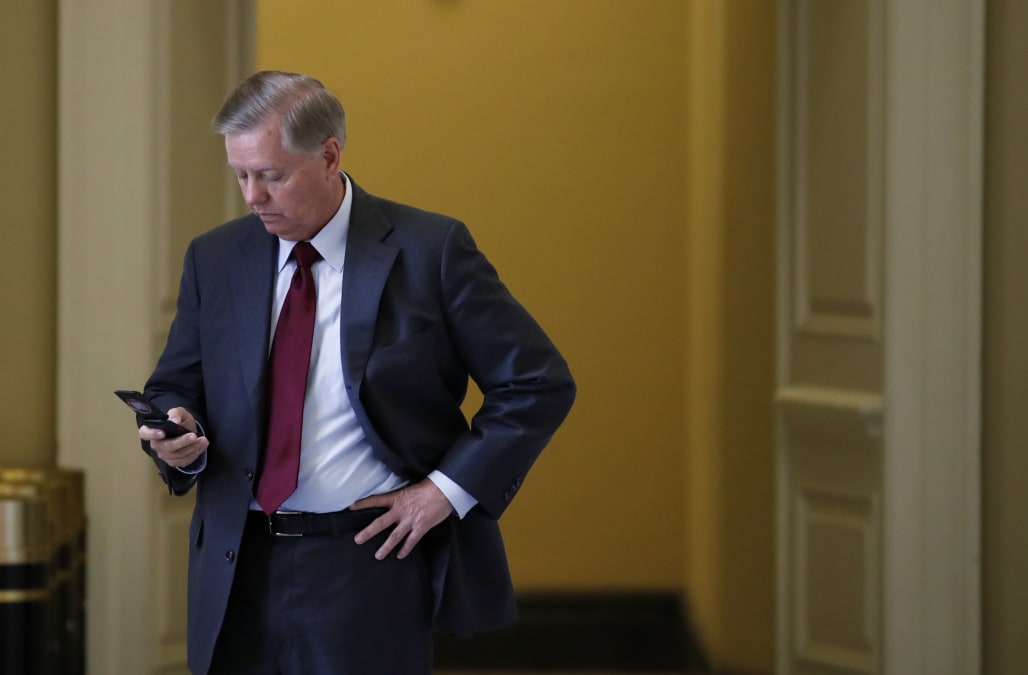 Sen. Lindsey Graham, R-S.C., was duped into phone conversations with Russian pranksters posing as Turkish officials back in August, his office confirmed to NBC News.

“We have been successful in stopping many efforts to prank Senator Graham and the office, but this one slipped through the cracks. They got him,” Graham spokesman Kevin Bishop told NBC.

“Your YPG Kurdish problem is a big problem,” Graham told the pranksters, one of whom was claiming to be Turkey’s defense minister, according to Politico. The reference was to Kurdish fighters who had been armed by the U.S. to combat ISIS.

“I told President Trump that Obama made a huge mistake in relying on the YPG Kurds,” Graham said, according to the report. “Everything I worried about has come true, and now we have to make sure Turkey is protected from this threat in Syria. I’m sympathetic to the YPG problem, and so is the president, quite frankly.”

He also urged the “minister” to drop plans to use a Russian anti-aircraft system, the report said.

The pranksters — Russian shock jocks — got Graham back on the phone a few days later, and the South Carolina Republican told them he’d spoken to Trump about their call.

US President Donald Trump (R) jokes with US Senator Chuck Grassley (L), R-Iowa,that he likes Sen. Lindsey Graham(L) R-SC during a meeting with Republican members of the Senate about immigration at the White House in Washington, DC, on January 4, 2018. / AFP PHOTO / JIM WATSON (Photo credit should read JIM WATSON/AFP/Getty Images)

U.S. Senator Lindsey Graham (R-SC) scratches his brow as he stands behind President Donald Trump during an event with Republican lawmakers to mark passage of sweeping tax overhaul legislation at the White House in Washington, U.S., December 20, 2017. REUTERS/Jonathan Ernst

U.S. Senator Lindsey Graham joins U.S. President Donald Trump for a meeting with some of his fellow Senate Republicans at the White House in Washington, U.S. December 5, 2017. REUTERS/Jonathan Ernst

U.S. Senator Lindsey Graham joins U.S. President Donald Trump for a meeting with some of his fellow Senate Republicans at the White House in Washington, U.S. December 5, 2017. REUTERS/Jonathan Ernst

“We want a better relationship with Turkey. That’s exactly what he wants,” Graham told them, according to the report.

“And this case involving the Turkish bank, he’s very sensitive to that,” Graham continued. “The president wants to be helpful, within the limits of his power.”

Graham appeared to be referring to a case involving a Turkish-Iranian gold trader named Reza Zarrab, who was represented by Trump’s current lawyer Rudy Giuliani.

Graham, a top Trump ally, has spoken out forcefully against Trump’s decision to withdraw U.S. troops from northern Syria, which has left Kurdish forces at the mercy of the Turkish military.

Graham’s spokesman said Turkey’s military moves have been a “body blow” for US-Turkey relations, and the senator will push for sanctions unless its forces immediately withdraw from Syria.

The same pranksters duped Rep. Adam Schiff in a 2017 call, when they pretended to be a former Ukrainian official offering “pictures of naked Trump.” Schiff said he immediately reported the call to law enforcement.

How quickly can players get into 'game shape'?

Prospective home buyers feel the heat over new mortgage rules, but all hope is not lost, industry leaders say