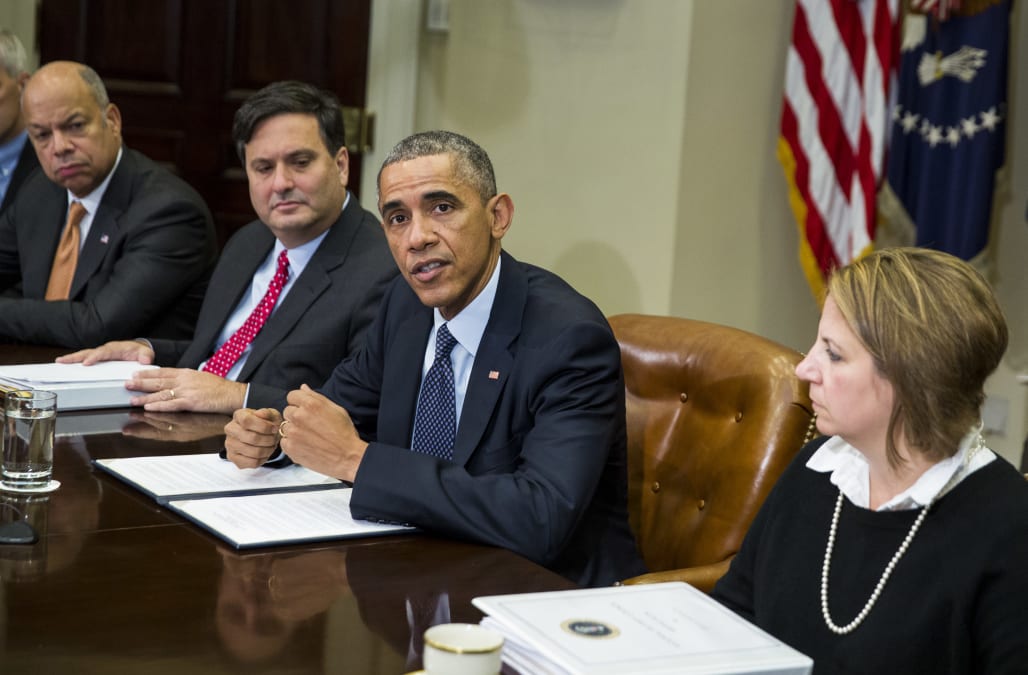 Ron Klain, who served as President Barack Obama’s “Ebola czar,” says Americans need to prepare for a massive spike in coronavirus cases and deaths over the next few weeks.

“We’re really at the inflection point here, where this disease is really going to explode in the U.S.,” Klain said in an interview with Yahoo News’ “Skullduggery” podcast. While the number of confirmed U.S. coronavirus cases is already doubling every three days, Klain said, he expects new cases to “accelerate further as we finally start to put some testing on the line and we start to really understand how big a problem we have — and I think it’s a very big problem.”

In 2014, Obama appointed Klain to coordinate the U.S. response to that year’s Ebola outbreak. Klain was also the chief of staff to Vice Presidents Al Gore and Joe Biden and is now an adviser to Biden’s presidential campaign. He said it is too late for the U.S. to control a massive spike in new infections over the next few weeks because of testing kit shortfalls and other planning failures.

The American health care system is already running near capacity, Klain said. If thousands of severely ill coronavirus patients descend on hospitals at once, they could overwhelm the system. That in turn could lead to many more deaths than would have occurred had the U.S. been more prepared for the virus, which first emerged in China in November.

“Particularly right now, at the end of flu season, things like ventilators, respirators, emergency room beds, care for respiratory patients — it’s already straining the system, and then you add hundreds of thousands of intensely ill patients to that and we’re going to see dire consequences in our hospitals,” Klain said. “We’re going to see that in terms of hospitals running out of beds to treat patients.”

As of Thursday afternoon, there were 10,755 confirmed coronavirus cases in the U.S. and 154 deaths, according to the Johns Hopkins University Coronavirus Resource Center.

Frontline medical workers are already reusing protective gear because hospitals have run out of masks and other basic necessities, Klain said. Worse, the health care system is struggling to treat patients not only for coronavirus but also for other health problems because doctors and nurses are becoming infected with the virus as well.

“There’s a hospital in Philadelphia that this week shut down its labor and delivery ward because all the labor and delivery nurses had coronavirus,” Klain said. “We’re going to see this as health care workers get sick, as hospitals get filled — it’s going to have an impact on all aspects of our health care delivery in the United States.”

Despite the social distancing measures that have been widely adopted by Americans in recent weeks, Klain still expects a dramatic jump in confirmed coronavirus cases because many people are unknowingly carrying the virus.

Coronavirus in the US

SAN JOSE, CA, USA – MARCH 18: A Safeway store in San Jose posts new shorter store hours to provide a safer work environment ahead of Tuesdayâs directive to shelter in place for residents of the six counties that make up the Bay Area, on March 18, 2020. (Photo by Neal Waters/Anadolu Agency via Getty Images)

SAN FRANCISCO, CA, USA – MARCH 18: Mounted officers patrol the area outside Pier 39 in San Francisco on day one of the shelter in place order on March 18, 2020. (Photo by Neal Waters/Anadolu Agency via Getty Images)

MANASSAS, USA – MARCH 17: Weapons on display at a gun shop in Manassas, Virginia, United States as gun and ammunition sales in the U.S. have skyrocketed as the coronavirus (COVID-19) pandemic spread across the country. (Photo by Yasin Ozturk/Anadolu Agency via Getty Images)

A security officer stands guard at a tent set up outside the emergency room at an AdventHealth hospital on March 17, 2020 in Orlando, Florida. The tent is part of AdventHealth’s surge planning in case extra space is needed to care for potential coronavirus cases in the community. (Photo by Paul Hennessy/NurPhoto via Getty Images)

A tent is seen set up outside the emergency room at an AdventHealth hospital on March 17, 2020 in Orlando, Florida. The tent is part of AdventHealth’s surge planning in case extra space is needed to care for potential coronavirus cases in the community. (Photo by Paul Hennessy/NurPhoto via Getty Images)

External and outside of emergency room views of the pandemic, novel Coronavirus, or COVID-19 are seen at Advocate Lutheran General Hospital on March 17, 2020 in Park Ridge, Illinois, United States. The collection includes additional tents, a warning construction sign, an empty road, a congested road, a law enforcement vehicle, and a drive through testing area. (Photo by Patrick Gorski/NurPhoto via Getty Images)

BOSTON, MA – MARCH 17: An emergency tent is set up at the Carney Hospital in Boston’s Dorchester for coronavirus pandemic use on March 17, 2020. (Photo by David L. Ryan/The Boston Globe via Getty Images)

LEONARDTOWN, MARYLAND – MARCH 17: Nurses screen patients for COVID-19 virus testing at a drive-up location outside Medstar St. Mary’s Hospital on March 17, 2020 in Leonardtown, Maryland. The facility is one of the first in the Washington, DC area to offer coronavirus testing as more than 5,200 cases have been confirmed in the United States, and more than 90 deaths have been attributed to the virus. (Photo by Win McNamee/Getty Images)

A sign on a table provides instructions for social distancing, while a group of people are seen in the background, selective focus, sitting around a small table, at a hospital in San Francisco during an outbreak of the COVID-19 coronavirus, California, March 16, 2020. (Photo by Smith Collection/Gado/Getty Images)

NEWTON, MA – MARCH, 16: Nurse practitioner Amy Israelian puts on protective gear in a tent in the parking lot of the Newton-Wellesley Hospital before testing a possible coronavirus patient in Newton, MA on March 16, 2020. (Photo by Adam Glanzman/For The Washington Post via Getty Images)

Two staff members wheel Amwell telemedicine carts into the entrance of the University of California San Francisco (UCSF) Benioff Children’s Hospital in Mission Bay, San Francisco, California during an outbreak of the COVID-19 coronavirus, March 16, 2020. As a result of the outbreak, patients are increasingly being asked to conduct telemedicine appointments to avoid infecting healthcare workers. (Photo by Smith Collection/Gado/Getty Images)

People line up to enter a triage tent outside of the emergency room at Memorial West Hospital in Pembroke Pines, Fla., on Monday, March 16, 2020. (Matias J. Ocner/Miami Herald/Tribune News Service via Getty Images)

WESTMINSTER, MARYLAND – MARCH 16: Dawn Canova, clinical manager for outpatient wound care at Carroll Hospital, takes off her protective gloves after taking a sample to test a person for the coronavirus at a drive-thru station in the hospital’s parking garage March 16, 2020 in Westminster, Maryland. Not open to the general public for testing, the station was set up to take samples from people who had spoken with their doctors and received explicit direction to get a test for the novel coronavirus called COVID-19. (Photo by Chip Somodevilla/Getty Images)

WESTMINSTER, MARYLAND – MARCH 16: Carroll Hospital Critical Care Unit Clinical Manager Stephanie Bakert talks to a person through his car window using a mobile phone before testing him for the coronavirus at a drive-thru station in the hospital’s parking garage March 16, 2020 in Westminster, Maryland. Not open to the general public for testing, the station was set up to take samples from people who had spoken with their doctors and received explicit direction to get a test for the novel coronavirus called COVID-19. (Photo by Chip Somodevilla/Getty Images)

NEW YORK, NY – MARCH 15: Passengers disembark from the Norwegian Bliss cruise ship on March 15, 2020 in New York City. Mayor Bill de Blasio said on Tuesday that any cruise ship passenger disembarking in New York City with a temperature over 100.4 will be given the choice of self-isolating at home or be taken to a hospital to protect against the spread of COVID-19. (Photo by Stephanie Keith/Getty Images)

DAYTON, WA – MARCH 14: Dr. Lewis Neace, head of the ER at Dayton General Hospital poses for a photograph. Dayton, a small town in rural southeast Washington has an aging population, had its first positive test for Coronavirus and is waiting on results of more tests. (Photo by Nick Otto for the Washington Post)

“We’re in this mess because we didn’t do enough to prepare for this mess when we had ample warning signs that it was coming,” Klain said, before adding that he is alarmed by the continued shortage of coronavirus tests. The U.S. is still having difficulty procuring test kits and now has fewer than 100,000 of them on hand.

Klain also said it is much too late to contain the virus in the U.S. because very few people could be tested in January and February, when it was already spreading.

“Hopes of isolating it seem very remote,” Klain said. “We still have major states where they don’t have the test supplies. … That means that people aren’t getting tested, and when they’re getting tested they’re waiting days, literally days, to get results.”

Officials are now “trying to avoid this giant spike all at once that really crashes the health care system,” Klain said. But that will result in the crisis lasting longer: “Lowering the peak means extending the duration.”

Klain said he is concerned about the lack of ventilators and respirators available, and said that until Wednesday little had been done to ensure an increase in production. President Trump invoked the Defense Production Act on Wednesday, which will allow the White House to force medical supply companies to produce needed equipment more quickly. However, those supplies will take time to distribute.

“To date, the Trump administration has taken a laissez-faire approach to the supply chain,” Klain said. “President Trump told governors basically, ‘Hey, go out there and find supplies as you can,’ as opposed to working with the private sector and the big producers to route the supplies to the places where they’re needed the most.”

The measures undertaken to slow the spread of the virus are harming the economy, but Klain said that can’t be avoided. Singapore has been relatively successful at containing the spread of the coronavirus with far less rigorous social distancing mandates, he said. But Singapore “brought the disease under control better and faster by doing the things we screwed up, which was testing and identifying chains of transmission.”

“Using traditional public health measures, the kind that we used in fighting Ebola, where you see who has it, where are they spreading it, getting those people contacted, isolating those people — that’s what we should have done,” Klain said. “And I think we still have to catch up.”

More from Yahoo News:
Masks, respirators and coronavirus: Keeping up with changing advice
‘Well-connected’ go first on coronavirus tests, Trump acknowledges
Pentagon has tested fewer than 500 for the coronavirus

‘I lost all my friends’: Trump says being president has ruined his social life

Mortgage deferral coming to an end? You have other options — but beware of penalties