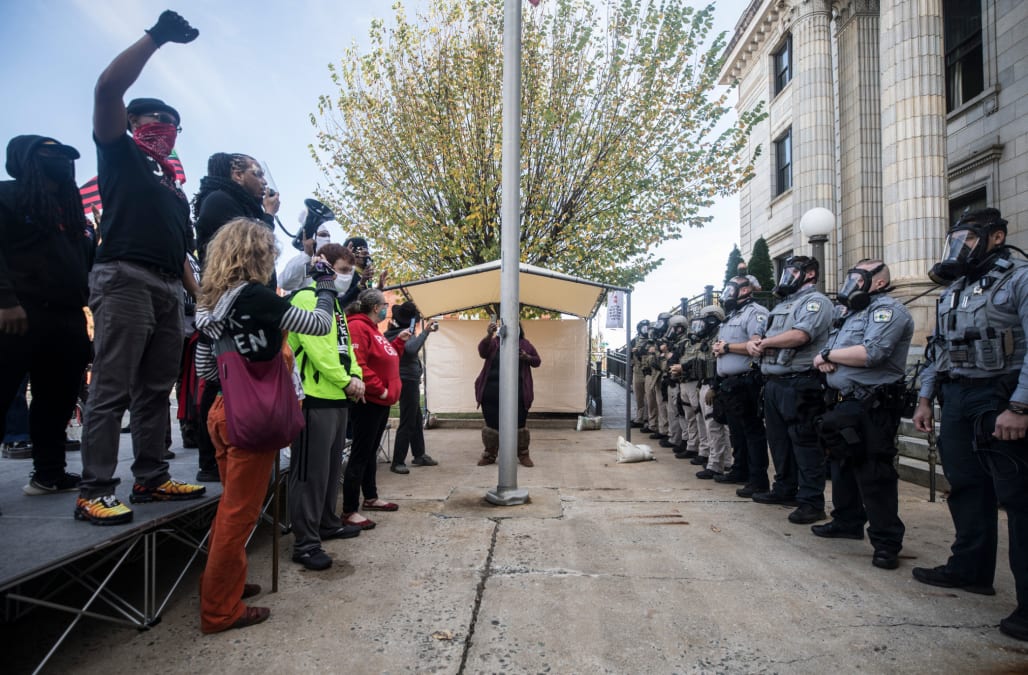 In a startling scene Saturday, North Carolina sheriff’s deputies and local police pepper-sprayed a group of mostly Black demonstrators, including young children, who were marching to the polls to vote.

State Attorney General Josh Stein fired off a statement soon after, warning that voters have a “constitutional right to cast their vote safely and securely, without threats or intimidation.”

About 200 people participated in the “I Am Change” march from a church to the polls to encourage people to vote in the town of Graham in Alamance County. It was organized by a local pastor and included the mayor of nearby Burlington.

After the crowd took a knee in the street for 8 minutes of silence to remember Minneapolis police victim George Floyd, deputies ordered them to disperse and began arresting people and pelting them with pepper spray, reported The Raleigh News & Observer. Police also reportedly used pepper spray at other points in the march.

At least three children became ill from the spray, according to the newspaper.

The deputies also dismantled a sound system set up for speakers in the courthouse square as part of the demonstration.

The Alamance County Sheriff’s Office issued a statement on Twitter saying that “unfortunately the rally in Graham ended due to concerns for the safety of all.”

The Graham Police Department issued a lengthy statement saying that organizers failed to get a road closure permit for the 8 minutes of silence, and that police aimed “pepper based vapor” toward the ground to disperse the crowd.

“I’ve never seen anything like it,” marcher Faith Hill told The News & Observer. “I think it was their intention, from the moment this march was announced, that we don’t get to the polls in numbers.”

Democratic congressional candidate Scott Huffman, who participated in the march, railed against the police action in a Twitter video, his eyes still smarting from the pepper spray.

Veronica Holman said her 3-year-old great-nephew threw up after being pepper-sprayed as they sat across the street from the courthouse. “They didn’t warn us or anything,” she told The News & Obsderver. “We were just sitting on the wall.”

Twelve people were reportedly arrested, including a journalist and and a  campaign manager for a county commissioner candidate.

It was the last day of early voting.

Stein tweeted later Saturday that the situation had calmed down, and that everyone who wanted to vote apparently managed to do so. He said he had “reached out” to the Alamance County Sheriff’s Office.

“We’re still gathering information but it appears that voting has continued and hasn’t been interrupted,” said Patrick Gannon, spokesman for the State Board of Elections.

“This is a non-partisan march,” key organizer Rev. Gregory Drumwright said earlier this month when announcing event. “This march is encouraging people to go to the polls and vote for change.”

Disneyland Rivals Are Back in Business — and That's a Good Thing