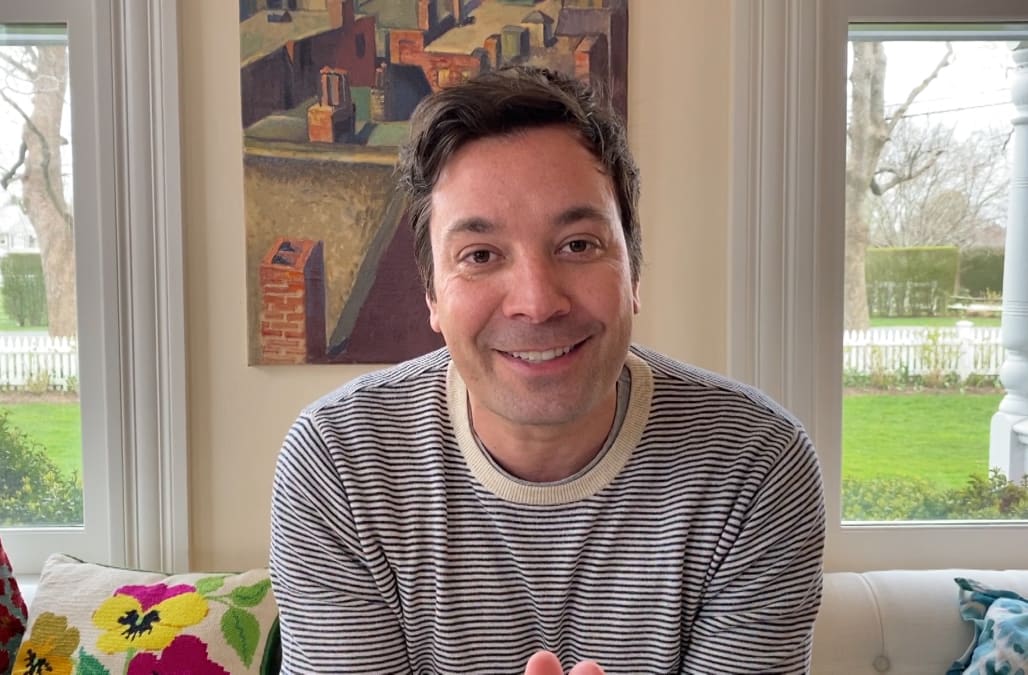 Jimmy Fallon returned to “The Tonight Show” on Monday, promising “a different kind of show” in light of nationwide protests over the killing of George Floyd by Minnesota Police.

Before addressing the demonstrations in reaction to police brutality that are roiling the country, Fallon told viewers he would “start personally and expand out” because “that’s where we need to start, with ourselves and looking at ourselves in the mirror.”

Jimmy Fallon through the years

Jimmy Fallon and Mary Louise Parker backstage at the MTV Rock & Comedy Concert at Battery Park in New York City, 5/10/02. The concert was staged as part of the first Tribeca Film Festival. Photo by Frank Micelotta/ImageDirect.

Jimmy Fallon jokes with and dresses identical to host Carson Daly on TRL at the MTV Studios in New York City. Jimmy will be hosting this years Video Music Awards live from Radio City Music Hall on August 29th. 8/14/02 Photo by Scott Gries/ImageDirect

“I had to really examine myself in the mirror this week because a story came out about me on ‘SNL’ doing an impression of Chris Rock in blackface,” he said. “And I was horrified. Not of people trying to cancel me or cancel this show, which is scary enough. But the thing that haunted me the most was, ‘How do I say I love this person?

“I respect this guy more than I respect most humans,’” Fallon said of Rock, his former “Saturday Night Live” castmate. “‘I’m not a racist. I don’t feel this way.’”

When the “Saturday Night Live” clip, which first aired in 2000, resurfaced and was getting backlash online, Fallon said initially he “kept getting advised to just stay quiet and not say anything.” “That’s the advice,” he said,” because we’re all afraid.”

At the risk of saying something that might get him in more trouble, Fallon explained to his audience, he issued a written statement on Twitter that said, “In 2000, while on SNL, I made a terrible decision to do an impersonation of Chris Rock while in blackface. There is no excuse for this. “I am very sorry for making this unquestionably offensive decision and thank all of you for holding me accountable.”

But after demonstrations last weekend about systemic racism and the need for criminal justice reform, Fallon said he realized he had to do more.

“I realized that the silence is the biggest crime that white guys like me and the rest of us are doing, staying silent. We need to say something. We need to keep saying something. And we need to stop saying ‘That’s not OK’ more than just one day on Twitter,” he said.

Fallon said it’s not enough to take to social media to offer thoughts and prayers. It takes action for any real change to occur.

He then introduced NAACP President Derrick Johnson, who praised Fallon’s monologue. “In this time, many people are searching for answers and display of anger and hopelessness and wandering, more people need to speak about where they are with an authentic voice,” Johnson said. “I think you did that.”

Later in the show, Fallon was joined by CNN’s Don Lemon, who said there was a path to a better America if people stopped “making excuses for racism.”

“We can’t go back to the way we were before,” Lemon said. “This is a time for us to change. I appreciate you for stepping up and being a leader.”