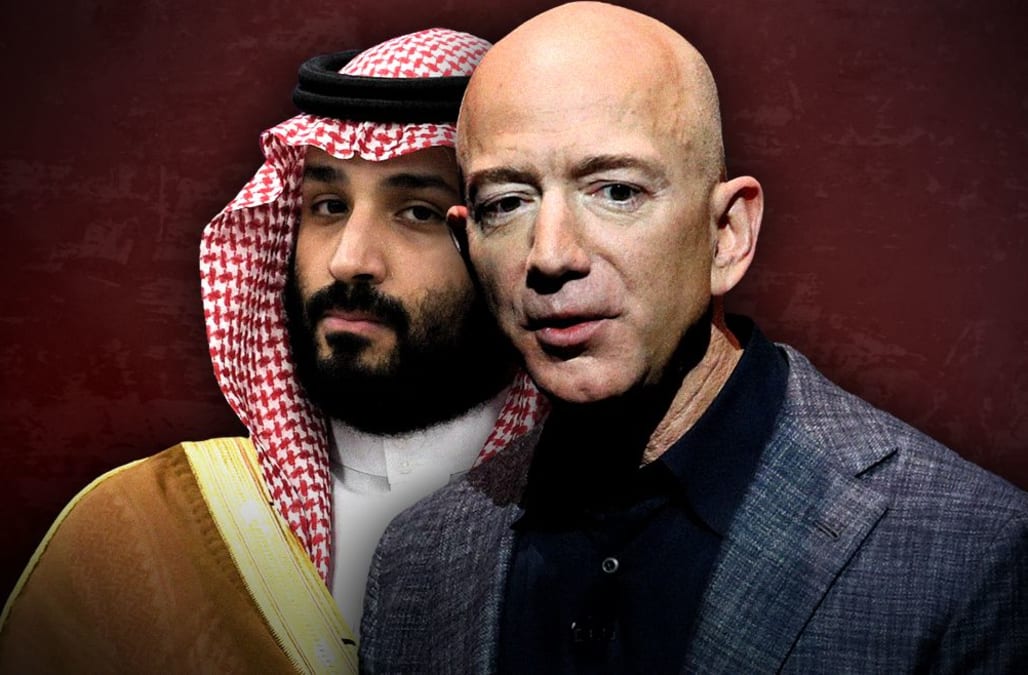 According to a technical analysis, Bezos’s phone appears to have been compromised shortly after he received a video message from the crown prince on WhatsApp, a messaging platform owned by Facebook. In the months that followed, Bezos received messages from Mohammed’s account that included information investigators believe could only have been obtained through hacking, including an allusion to a phone conversation Bezos had with the FBI and a cryptic reference to a then secret relationship. The Saudi government called the allegations “absurd.”

Bezos’s phone was compromised in the same period of time that the Washington Post, a newspaper he owns, was running articles critical of Mohammed. One of the Post’s reporters, Jamal Khashoggi, was murdered at the Saudi consulate in Turkey in an attack the CIA believes was directly ordered by the crown prince.

Early last year, Bezos accused the tabloid the National Enquirer of trying to extort him with private pictures and messages and suggested that the Saudis may have been connected. The U.N. investigation did not directly link the crown prince to the Enquirer. Bezos and his wife, MacKenzie, divorced a few months after his relationship with another woman was made public.

The implications of a foreign leader hacking one of the world’s richest men, possibly as a means to stifle critical press coverage, are concerning for many reasons, experts say. The brazen nature of the hacking suggests that the crown prince has confidence his country won’t face major repercussions from a U.S. government led by President Trump — who has sided with the Saudis on a number of contentious issues and has had his own clashes with Bezos over the Post’s coverage. The hack also raises fears that Saudia Arabia may interfere in the 2020 election in an effort to keep Trump in office.

There’s also broad concern about whether other high-profile people reported to have relationships with the crown prince may have been hacked, including leaders of other tech companies, British Prime Minister Boris Johnson and President Trump’s son-in-law Jared Kushner.

Some cybersecurity experts argue that it’s too early to definitively blame the crown prince for the hack. The investigators’ analysis, they argue, makes a sweeping conclusion based on incomplete information and a series of suppositions. It is even suggested that the crown prince himself may have been hacked.

Investigators say they plan to do a deeper analysis of Bezos’s phone that could definitively prove whether the crown prince was involved in the hack. A separate ongoing investigation by federal prosecutors has reportedly found evidence that Bezos’s private texts were leaked to the National Enquirer by his girlfriend’s brother.

An attack on the press is a threat to American democracy

“White House senior adviser Jared Kushner has been known to personally message with MBS over WhatsApp, and has met with him in intimate settings multiple times. And the same tabloid that allegedly attempted to bury Donald Trump’s purported sexual improprieties was instrumental in exposing those of Bezos, after the president lobbed dozens of attacks against the Amazon founder over his ownership of the Post, whose coverage he detests.” — Caleb Ecarma, Vanity Fair

Many world leaders have misguided faith in the security of WhatsApp

“It’s easy to dismiss this maze of revelations involving Bezos and MBS as just another high-profile hack. What’s notable here, however, is that the hacking happened within WhatsApp, a service that promotes itself as the safe option for people who are concerned that their messages will be intercepted by hackers.”  — Sara Morrison, Recode

“Perhaps the most striking thing about the report is the picture that emerges from it of Saudi Arabia’s cyber-espionage efforts, suggesting that the country is carrying out espionage efforts so openly and haphazardly that it does not really care who finds out about them and lacks any coherent strategy for conducting online surveillance or using the information it collects effectively.” — Josephine Wolff, Slate

Revelations of the hack may weaken the crown prince’s ability to meddle in the U.S.

“The allegation that the prince was personally involved is especially damaging, and will lower even further his international standing. In the U.S., it will harden the resolve of many in Congress to hold MBS to account for the murder, despite President Donald Trump’s best efforts to shield him.” — Bobby Ghosh, Bloomberg

The crown prince may himself have been hacked

“No one seems to be taking into account the possibility that [the crown prince’s] phone was hacked and was used as a launchpad to hack Bezos.” — Cybersecurity journalist Kim Zettner

The heads of other tech giants may also have been compromised

The Latest: Bills settling for FGs against winless Jets

The big winners and losers in the NBA's new schedule proposal