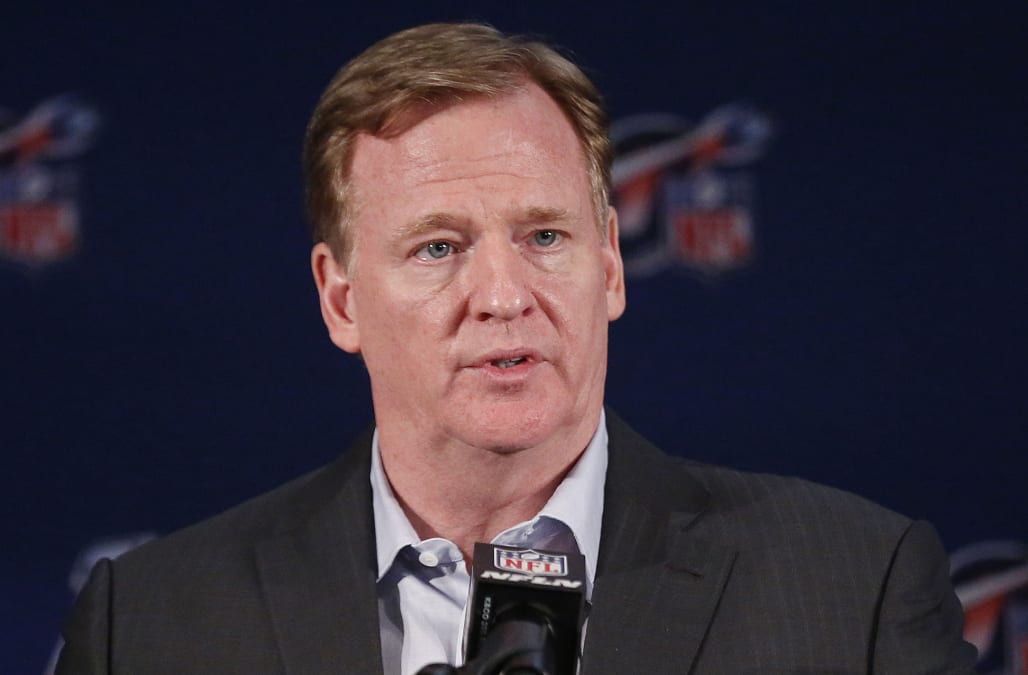 The NFL’s public shift on the Black Lives Matter movement, which led to a Friday video from commissioner Roger Goodell condemning racism and admitting wrongdoing, started with an Instagram DM.

Bryndon Minter wasn’t sure Saints receiver Michael Thomas would even read the message. He knew it could get him fired. He continued anyway.

“Want to help you create content to be heard around the league,” Minter wrote. “I’m a NFL social employee and am embarrassed by how the league has been silent this week. The NFL hasn’t condemned racism. The NFL hasn’t said that Black Lives Matter.

“I want [to] help you put the pressure on. And arm you with a video that expresses YOUR voice and [what] you want from the League. Give me a holler if you’re interested in working together, thanks bro!”

Within 15 minutes, Thomas wrote back. Twenty-four hours later, he and other prominent black NFL players published a powerful video. Within another 24 hours, tens of millions of people watched it – and it had changed the league’s relationship with social injustice for good.

“A message on behalf of the nfl” pic.twitter.com/iilDpnZfyV

Goodell took those questions, then later in the day took to his basement camera.

“We, the NFL, condemn racism and the systematic oppression of black people,” he said, just as the players had demanded. “We, the NFL, admit we were wrong for not listening to NFL players earlier and encourage all to speak out and peacefully protest. We, the NFL, believe Black Lives Matter.”

‘That’s what inspired me to go rogue’

The public shift, in reality, began with employee frustration that dates back to 2016. That’s when Kaepernick first took a knee to protest racial injustice and police brutality. The aftermath, Toney says, was “crazy and scary at times.” The league, in many ways, attempted to suppress protests. Internally, some employees weren’t happy with its response.

Almost four years later, in the wake of George Floyd’s death, the same topics arose again. In deep conversations, social staffers dreamed up their ideal NFL response. While acknowledging it was a “fool’s errand,” they crafted strong, pointed statements — the type they hoped the league would release. Then, last Saturday, they had to hit send on the actual one, which, Minter says, “we felt was empty.”

Roger Goodell through the years

Roger Goodell, the executive vice-president of the NFL, speaks at a news conference in Mexico City to announce the league’s first regular season game outside of the United States, July 15, 2005. The San Francisco 49ers will play the Arizona Cardinals on October 2 this year at Mexico City’s Azteca stadium. REUTERS/Andrew Winning AW/DY

NFL Commissioner Roger Goodell (L) and New England Patriots Chariman and chief executive officer Robert Kraft laugh before the start of a game in Foxboro, Massachusetts, September 24, 2006, while announcing that the New England Patriots and the Seattle Seahawks will play in the first NFL game in China. The game will be played August 8, 2007. REUTERS/Jessica Rinaldi (UNITED STATES)

Roger Goodell (C), the new Commissioner of the NFL, talks with a group of officials before the start of the Pittsburgh Steelers and Miami Dolphins NFL football game in Pittsburgh, Pennsylvania, September 7, 2006. REUTERS/ Jason Cohn (UNITED STATES)

Quarterback Matthew Stafford from the University of Georgia stands with NFL Commissioner Roger Goodell after being selected by the Detroit Lions as the number one overall pick in the 2009 NFL Draft at Radio City Music Hall in New York, April 25, 2009. REUTERS/Lucas Jackson (UNITED STATES SPORT FOOTBALL)

Apr 28, 2016; Chicago, IL, USA; Carson Wentz (North Dakota State) with NFL commissioner Roger Goodell after being selected by the Philadelphia Eagles as the number one overall pick in the first round of the 2016 NFL Draft at Auditorium Theatre. Mandatory Credit: Kamil Krzaczynski-USA TODAY Sports

Jan 22, 2017; Atlanta, GA, USA; NFL commissioner Roger Goodell on the sidelines prior to the game between the Atlanta Falcons and the Green Bay Packers in the 2017 NFC Championship Game at the Georgia Dome. Mandatory Credit: Jason Getz-USA TODAY Sports

On Monday, they were still posting highlights, going about business as usual against their will. “We came to a point where we didn’t feel comfortable posting stuff like that,” Minter says. Distress spread in private discussions. Employees expressed concerns in meetings. Those who spoke up got supportive Slack messages from co-workers they didn’t know. “The sentiment was pretty unanimous,” Minter says. “We wanted a simple acknowledgement that we, as a company, condemn racism.”

Instead, they got promises but nothing “actionable.”

“We didn’t feel like our voices were heard,” Minter says. “And that’s what ultimately inspired me to go rogue.”

On Wednesday night, he circumnavigated standard protocol for NFL video producers and reached out directly to Thomas. They had no personal relationship, but Thomas was immediately on board. Thomas entrusted Minter with drafting a script the players could read on camera. Minter went for a walk and called Toney. Toney’s first idea got shot down. Then he realized: For days, we’ve been talking amongst ourselves about what we wished the NFL would say. What if the players told the league to say it?

Minter got goosebumps. He rushed home, and they got to work. They started with “Black Lives Matter” – because, Toney says, “to that point, we weren’t able to say that, as a league.” Toney wrote, Minter refined and rearranged his words, and presented prompts to Thomas. Thomas loved them and reached out to friends around the league. Minter sent his boss a text, saying they needed to talk in the morning. Toney went to sleep.

The following morning, Minter awoke to videos from three players and promises of more. Ezekiel Elliott had already recorded. The project, he realized, was already accelerating beyond expectations.

Toney awoke to an email from Minter. The subject: “Holy sh*t.”

‘I was ready to lose my job’

Minter disclosed the plot to his boss on Thursday morning. Bosses told their bosses, and news filtered up through the NFL’s hierarchy. Within 30 minutes, Minter says, he was invited to a Zoom call with superiors. “And I was ready to lose my job on that Zoom,” he says.

But by that point, he had videos from five players, and buy-in from many more. Patrick Mahomes and Deshaun Watson were in. Odell Beckham and Saquon Barkley were in. Lamar Jackson, he says, was in as well — but never ended up sending videos.

NFL execs chose to reckon with the final product rather than retaliate. Minter went back into his bunker, with Thomas working tirelessly to feed him roughly 100 clips from more than a dozen stars. Minter edited them into 71 seconds that could change the league for good.

“It’s been 10 days since George Floyd was brutally murdered,” Thomas says off the top.

“How many times do we need to ask you to listen to your players?” Tyrann Mathieu asks.

Players published the video while NFL social media staffers were in a meeting. They saw it, and soon learned the backstory. When they did, many swelled with pride. Dozens retweeted it with a simple message: “I stand with the players.”

I stand with my coworkers and our players. Let’s make change. https://t.co/UUu50ro2Pu

But their message reflected those of NFL employees at all levels. Minter says colleagues from various departments, of various colors, have reached out to him to say: “Thank you so much for voicing that. It encapsulated exactly how I’ve been feeling.”

To see Goodell listen at Friday’s town hall, and then to hear him voice those same words, brought some a sense of relief.

“I’ve heard a lot of people, this week, say that working at the league was tough for them,” Toney says. “Because they needed that leadership. And then to finally receive it … means the world to me.”

We, the NFL, condemn racism and the systematic oppression of Black People. We, the NFL, admit we were wrong for not listening to NFL players earlier and encourage all to speak out and peacefully protest. We, the NFL, believe Black Lives Matter. #InspireChangepic.twitter.com/ENWQP8A0sv

He and others acknowledge, of course, that a couple videos are different than actions and change. But they’re hopeful. Minter had a “constructive” conversation with a league executive on Friday. “Based on what I have been told,” he says, “that video armed [them] with a very well-thought-out, simple, unavoidable message that had to be addressed and is making historic things happen.”

“It’s clear, at least to me, that they’re trying to get on the right path, both internally and externally. Both with the people who root for the teams on Sunday and with the employees, especially employees of color, who make this league run. Because you can’t talk out of both sides of your mouth. You can’t have a league that’s 70 percent black and have no stance when it comes to this. … So the real lesson here is that there’s a human side to this league that I hope, and I pray, we embrace going forward.

At 33, this nurse practitioner earning $120,000 a year wants to make a huge life change and move to Europe. But where to start?