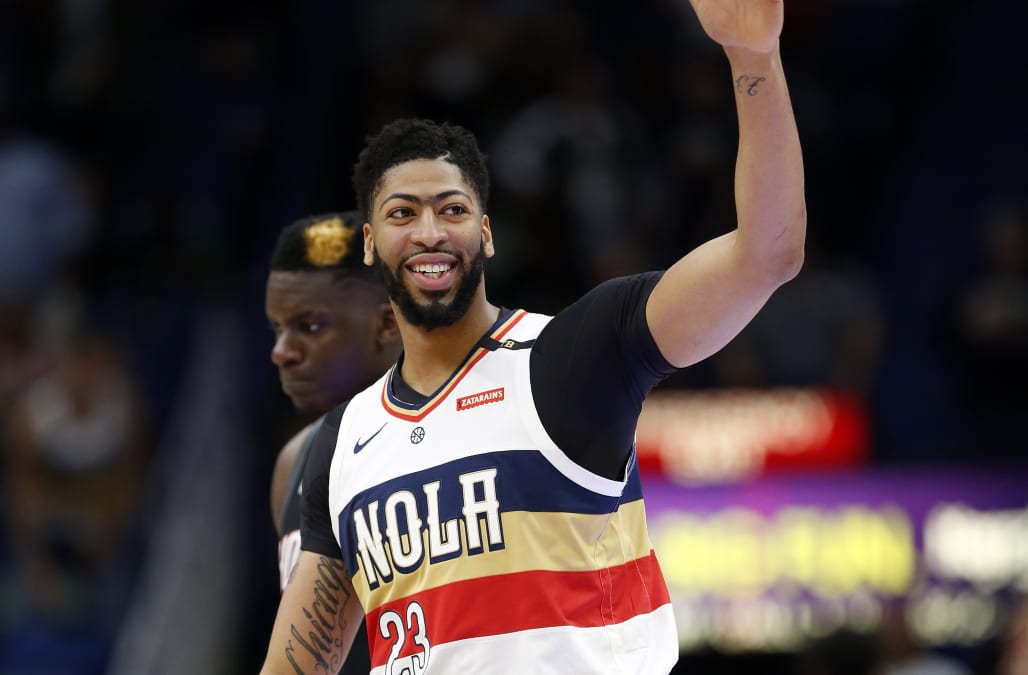 It took months to happen, but it’s finally happened. The New Orleans Pelicans have agreed to a trade that will send superstar forward Anthony Davis to the Los Angeles Lakers for a large haul of young assets, ESPN’s Adrian Wojnarowski reports.

Headlining the deal on the Pelicans’ side are point guard Lonzo Ball and forward Brandon Ingram. Also included are guard Josh Hart and a whopping three first-round picks, including this year’s fourth overall.

And just like that, one of the most prolonged NBA trade sagas in recent memory has come to a close.

Pelicans and Lakers finally come to terms on Anthony Davis

With different negotiators on both sides, this trade might have come months earlier. But, obviously, things got complicated.

It all started in January when Davis’ agent Rich Paul very publicly announced that the star wanted to be traded to a championship contender, garnering a $ 50,000 fine form the NBA in the process. It soon became clear that Davis most desired the Lakers as a destination, where he could co-star alongside LeBron James for one of the league’s most storied franchises.

Negotiations with the Lakers were soon underway, with Los Angeles offering nearly every young player on its roster for Davis. After days of frosty negotiations, talks broke down and the Pelicans opted to wait until the offseason to trade Davis.

The failed trade talks left plenty of bad blood on both sides, with some speculation that the Pelicans went so far as to deliberately sabotage negotiations in retaliation for the Lakers’ perceived tampering with their star player. Sniping over who leaked what continued months after the matter came to a temporary close.

Ok got him leaving the basketball jersey embroidery shop. This is downtown LA https://t.co/fMhrjFJKgz

Honestly, this LeBron news is the best birthday present my husband could have possibly gotten.

Welcome to the Lake Show @KingJames! Rock that purple and gold – looking forward to a great season.

Congratulations to the Boston Celtics next years eastern conference champions.

Me and @KingJames walking into LA. https://t.co/S2gYfOxwuz

I am sure the Lakernation is rejoicing The acquisition of LeBron James means that the Lakers are just a smidgen awa… https://t.co/4tqUHmjmDa

The trade saga also reportedly sowed distrust among the Lakers’ young core with LeBron James, who seemed quite ready to trade them at a moment’s notice. Now, James has his co-star, and all but a few of his younger teammates will be suiting up for the Pelicans or elsewhere next season.

The Lakers went to extraordinary lengths to pair James and Davis at Staples Center, and they did that because the addition of Davis figures to turn them into instant contenders.

Even better for the Lakers is that forward Kyle Kuzma isn’t in the trade. Kuzma had been reported to be the player the Pelicans most sought in negotiations, but the Lakers clearly valued him above all the other players included in the deal.

Trading away Ball, Ingram and Hart does do a number on both the Lakers’ starting lineup and depth, but the team is competing in a league where superstars matter above all else. Just one can make you a contender. Two can turn you into the talk of the league.

And the Lakers probably aren’t done either, as The New York Times’ Marc Stein reports that Charlotte Hornets guard Kemba Walker will be a top target for the team in free agency.

Signing Walker, likely to a max deal, while also holding down Davis and James’ salaries would leave the Lakers with little cap room to fill out the team, but a starting lineup of Davis, Kuzma, James, Walker and, say, Kentavious Caldwell-Pope is already enough to strike fear into the league.

Say this for the Pelicans, when your superstar publicly requests a trade like Davis did in January, you aren’t supposed to be in this good of a position in June.

The Pelicans already have the No. 1 overall pick, which will almost certainly turn into generational prospect Zion Williamson. There’s the next superstar for the team, gift-wrapped and ready to land on every team promotion for the next decade.

Now, the team receives three very solid players all under the age of 25 to provide Williamson a strong supporting cast alongside Jrue Holiday and Julius Randle. All three of those players have their flaws, but Ball and Ingram particularly still carry star potential.

Sure, the Pelicans reportedly turned down an offer from the Lakers that included Ball, Ingram and Hart as well as Kuzma and big man Ivica Zubac, but the team was in a completely different situation than now, where it holds the rights to Williamson and a clear path forward.

We still don’t know which picks the Pelicans will be receiving in addition to this year’s No. 4 overall, but there’s a good chance they could be deflated if the Lakers are as good as they plan. Teams are also reportedly interested in picking up that No. 4 pick.

The Pelicans might not be done, but the biggest step has been taken, and the NBA has now taken a new shape.