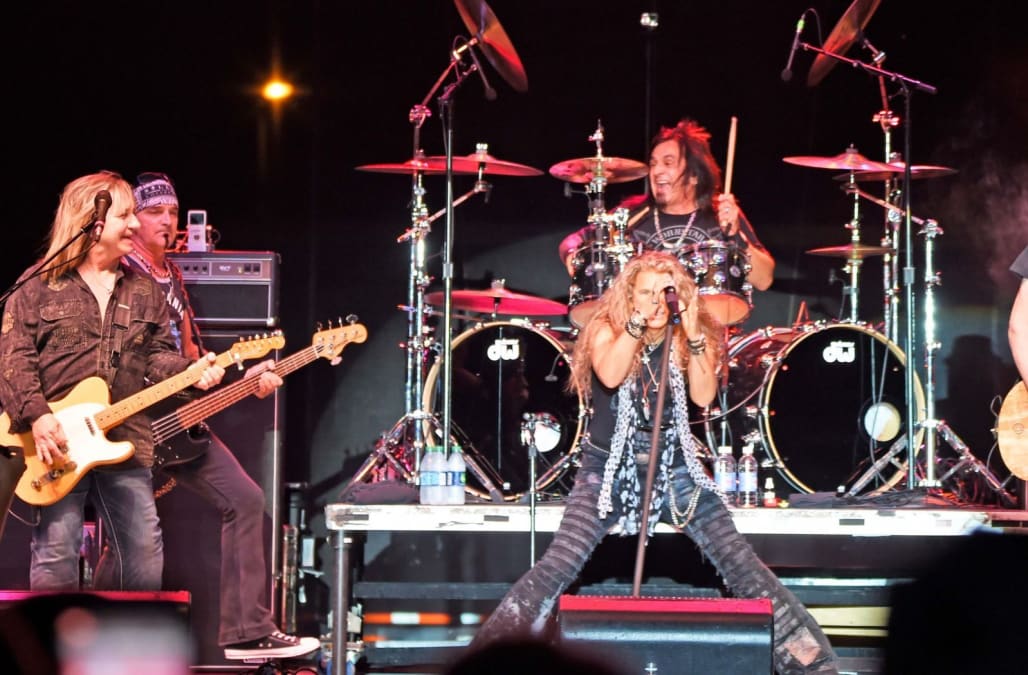 In February 2003, hard rock band Great White was involved in one of the biggest and most infamous concert tragedies in music history, when pyrotechnics set off by their tour manager ignited flammable acoustic foam in the walls and ceiling of Rhode Island nightclub the Station. The resulting blaze killed 100 people, including Great White guitarist Ty Longley, and injured 230 others. (The band’s tour manager, Daniel Michael Biechele, later pleaded guilty to 100 counts of involuntary manslaughter and was given a 15-year sentence, though he only spent two years in prison; the two club-owners also received suspended sentences.)

Now Great White is catching flak for its seeming irresponsibility once again, after the current lineup played a show in North Dakota this week with zero social-distancing precautions. A headline from Spin, “Great White Wants to Be Remembered for More Concert Disasters,” summed up the angry online reaction after news of the outdoor gig, which took place on July 9, was reported this weekend by Blabbermouth.

On Saturday evening, as outrage grew on social media, Great White issued the following statement to Yahoo Entertainment through their publicist:

“Great White would like to address our Thursday, July 9, at First on First Dickinson Summer Nights concert in North Dakota. We understand that there are some people who are upset that we performed this show, during this trying time. We assure you that we worked with the Promoter. North Dakota’s government recommends masks be worn, however, we are not in a position to enforce the laws. We have had the luxury of hindsight and we would like to apologize to those who disagree with our decision to fulfill our contractual agreement. The Promoter and staff were nothing but professional and assured us of the safety precautions. Our intent was simply to perform our gig, outside, in a welcoming, small town. We value the health and safety of each and every one of our fans, as well as our American and global community. We are far from perfect.”

However, according to the Dickinson Press, the concert series “First on First: Dickinson Summer Nights” in Dickinson, N.D., where Great White performed the controversial show, has no official COVID-19 safety rules in place. “We do not have restrictions, believe it or not, we don’t have any,” event coordinator April Getz told the newspaper. “It’s one of those things where if people feel comfortable coming down and mixing and mingling, that’s their personal choice. We’re leaving it up to everybody that chooses to attend.” Video of the Dickinson gig posted by current Great White lead singer Mitch Malloy on his own YouTube page clearly shows that both his band and many concertgoers were willing to take that risk, with no masks in sight onstage or amid the packed crowd.

It should be noted that North Dakota has not been hit as hard by COVID-19 as have other parts of the U.S.; as of this writing, the state’s Department of Health reports 623 active cases. However, that is double the number from 10 days earlier, with 90 of those 623 cases reported on Saturday, July 11.

Interestingly, founding Great White member Jack Russell, who left the band in 2009 and now tours with his own lineup billed as “Jack Russell’s Great White” — and did not participate in the July 9 North Dakota concert — recently blasted anti-maskers in an interview with the Austrian TV show Mulatschag. “There’s no need to be out [in public places]. People don’t take it seriously — they don’t take the virus seriously. It’s sad. I don’t know what everybody else out there is thinking — they may think I’m full of it — but I take this very seriously,” Russell stated. “It’s no small wonder that when you open all these places up, ‘Gee, the numbers [of coronavirus cases] rose up.’ It’s like, what did you think was going to happen? It’s like, ‘I took my mask off and I got COVID.’ Well, what a big surprise that is. People just don’t think. … If you want to get sick, that’s great. But put your mask on for me, because I’ve got my mask on.”

Great White is not the only musical act to face backlash after moving forward with live concert plans despite nationwide coronavirus concerns. Country star Chase Rice has vowed to take safety precautions (but will continue to tour) after footage of the unmasked audience at his recent East Tennessee concert drew outrage, while ‘90s rapper Vanilla Ice ultimately decided to cancel his planned July 3 concert in Austin due to public protest.

Employee Roundup: Ways to Creatively and Safely Celebrate the Holidays this Year